Energy Saving Trust are offering interest free loans as of May 2020 for the installation of battery storage. We can supply install a 2kw battery system for around £2000+VAT subject to a full survey.

You can make a huge step towards electrical energy independence using solar storage batteries. Solar battery storage systems let you store up electrical power for when you really need it. We provide a free survey and design service for electrical battery storage devices contact us today. These systems can reduce export to the grid allowing you to use more of your generated electricity and reduce your electricity bill. 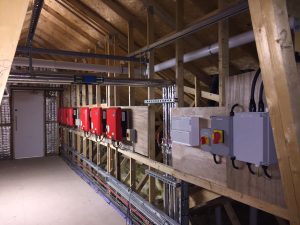 Batteries designed to capture surplus electricity generated by your solar PV system allow you to store solar electricity for use later in the day. This guide sets out the main features you might need to take into account when deciding if a battery storage system is suitable for you and your solar PV system. Included are 20 questions to ask your installer should you consider a battery system. Potentially batteries can help you use more of the electricity generated by your PV system, saving you money on your electricity bill. But they’re not for everyone, as you generally need to be generating ‘surplus’ solar electricity to store. It is also important to note that, contrary to expectations, some battery storage systems are not designed to work during power-cuts. In addition they are not cheap: at today’s prices, poorly designed systems may not repay their initial investment (in what they save on electricity bills). But prices continue to fall and the technology is also improving, meaning that battery storage is becoming a viable economic option for some households and businesses. 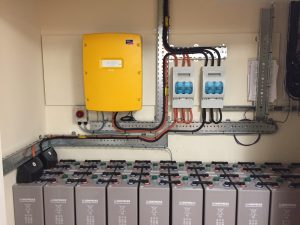 The solar PV system on your roof will generate electricity during the day that you can use in your home. Without a means of storing that solar electricity, any surplus energy that you don’t use is ‘exported’ to the local electricity grid. During times when the panels are no longer generating (or not generating enough for your needs), you need to buy electricity from your electricity supplier.

Why is solar battery stored? 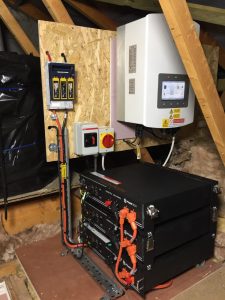 What are the best batteries for storage?

We use several manufacturers including Tesla Powerwall,  Sonnen , LG , Enphase.

The two types of batteries most commonly offered for solar PV storage in the home are lithium-ion and lead-acid batteries. Some of their key features and differences are set out here: Batteries and battery systems can vary considerably in shape, size and weight. The greater the battery capacity, the greater the battery size and weight. Typical domestic systems vary from being the size of a small computer to the size of a washing machine. 3.2 Battery capacity Battery storage systems are often provided with a power rating in kiloWatts (kW). Storage batteries for a grid connected solar PV storage system are typically around 1kW to 7kW. This is the capability of the battery to provide power. A battery’s stated electricity capacity, as expressed in kilowatt-hours (kWh)1 is generally larger than the battery’s actual useable capacity, because: • all batteries lose some energy in charging and discharging, though some have better ‘charge-discharge efficiency’ than others. • most batteries are not designed to be routinely fully discharged (can reduce battery life). Some have deeper discharge capability than others. Typical Lead-acid battery systems may be setup to limit the ‘depth of discharge’ to around 50%, Lithium-ion systems to 75% or more. 3. 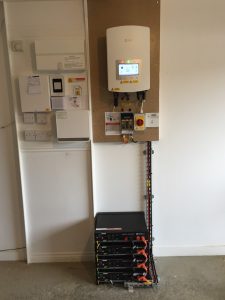 Battery storage systems are often provided with a power rating in kiloWatts (kW). Storage batteries for a grid connected solar PV storage system are typically around 1kW to 7kW. This is the capability of the battery to provide power. A battery’s stated electricity capacity, as expressed in kilowatt-hours (kWh)1 is generally larger than the battery’s actual useable capacity, because: • all batteries lose some energy in charging and discharging, though some have better ‘charge-discharge efficiency’ than others. • most batteries are not designed to be routinely fully discharged (can reduce battery life). Some have deeper discharge capability than others. Typical Lead-acid battery systems may be setup to limit the ‘depth of discharge’ to around 50%, Lithium-ion systems to 75% or more

What Could a Battery System Power?

A fully-charged medium-sized system could store sufficient energy to power during the evening your lights and lower-powered items like your fridge-freezer, TV and laptop. Over four or five hours, all of these together will use at most a few “units” or kiloWatt-hours (kWh), of electricity. However, the battery will quickly run out if you put on heavy energy users like the washing-machine or tumble-dryer: these can consume 2 – 3kWh in a single use. And in winter, the battery might not store enough to provide for even the lower-powered items for many hours

A battery’s efficient lifetime depends on the technology and the way the battery is used – significantly on the number of ‘cycles’ (complete full battery charge and discharge) that they undergo. Manufacturers generally give an expected lifetime in years and/or in ‘charge-discharge cycles’. For example: • ‘Life expectancy = 10 years or 10,000 cycles, whichever is the sooner’ Lithium-ion batteries last longer than lead-acid: you may see a 10-year lifetime expectancy claimed and this is improving all the time. Normally the battery storage system will monitor the battery performance and should give you an indication when your batteries need replacing. Some battery system manufacturers operate a battery leasing and/or replacement scheme for worn-out batteries and arrange for the safe disposal/recycling of the battery.

As with many electrical products, a warranty for a battery is normally for a shorter period than its lifetime expectancy: for example a 5 year warranty on a battery expected to last 10 years. If you install a battery storage system you must notify your provider of your building and contents insurance as they will need to know.

There are two main ways of linking a battery storage system into such a system: • DC Coupled: the batteries are installed on the same side of the solar inverter as the solar PV panels, they charge from the panels, and their DC is only converted to AC when it’s used (‘DC-coupled’) OR • AC Coupled: the batteries are installed on the grid-side, where the solar PV’s DC has already been converted to AC (‘AC-coupled’). A separate inverter converts the AC back to DC for storing in the battery. When the battery discharges, the same separate inverter converts the DC back to AC. 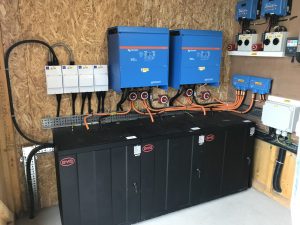 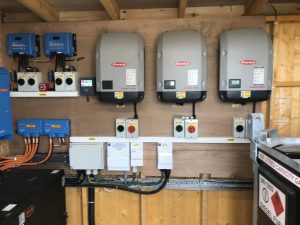 Despite expectations, some storage systems will not provide power during a power-cut.

Cost vs Benefits – Are solar batteries worth the cost?

You can weigh up the substantial costs of the battery storage system against the potential benefits. In purely financial terms, you can compare the cost of the battery system with your estimated benefit in savings. On the cost side, you need to take into account: • the full cost of the system, including any running costs • the cost of replacing the battery at least once in the lifetime of your PV panels. On the benefits side, every kWh you use from the battery is a kWh you don’t have to import from the grid and pay your electricity supplier for. How much YOU will save over the course of a year depends on your circumstances, including: your solar PV system, your ‘load profile’, the battery concerned, your electricity tariff per kWh. In working out savings, remember to factor in: • The cost of any mains-charging • Whether your FIT generation or export tariffs are affected • The savings won’t be the same in the winter months as in the summer. Comparing total costs with net benefits per year will show you how many years it would take for the system to ‘pay for itself’ or ‘payback’. This is an approximate calculation only. It assumes a constant level of annual benefit over the years and does not take into account any inflation, or changes in usage, electricity prices or export tariffs.