R.B. Grant Electrical Contractors provide Power Factor correctors throughout Scotland from our Fife base. This system is used to reduce your bills, reducing the necessary power from the grid. We offer a free analysis and design service of your current electrical requirements. All of our work is carried out by experienced power factor correction electricians.

We have solutions for either for single phase or tree-phase, for low voltage or medium voltage. Static or automatic solutions also exist as a function of your requirements. With an automatic capacitors’ system, the correction will change as a function of the installation, but it’s more expensive.

What is the Power Factor?

The Power Factor (PF) is the ratio of the real power (P in W) to apparent power (S in VA). Basically it’s the cosine of the phase angle called φ between the current and voltage wave-forms. Because it’s a cosine, the power factor can vary between 0 and 1. If a device has a positive angle as the current is lagging the voltage (between 0 and PI/2), it’s called inductive (a coil for example is a pure inductive equipment φ= PI/2). 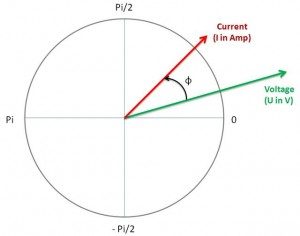 If a device has a negative angle (between 0 and –PI/2), it’s called capacitive (a capacitor is a pure capacitive equipment, φ= -PI/2). When the current and the voltage are in phase, the angle is 0. Look below for more explanations on the angle between the voltage and the current with the representation of the trigonometric circle:

This angle defines the different power of a device. Three types exist:

Why do we need to correct the power factor?

Basically, in the best working conditions, we want reactive power to be very small which has no useful function, but is necessary for the equipment to operate correctly. We also want active power almost equal to the apparent power.

The explanation is given by the different power types. Indeed ,the active power P also called working power is the necessary power for a device to work. If we want working equipment, this power has to be sent. And the apparent power S represents the power sent by the producer. Consequently, your bill will change as a function of the apparent power.

Look at this example which shows an increase of the power factor angle:

Other pages in this section