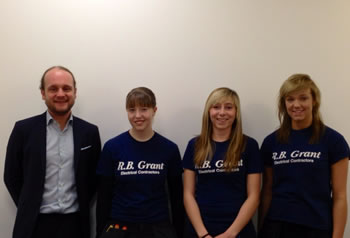 The new year brings exciting changes to R B Grant Ltd. My father has decided to retire after 40 years in the business. In that time there have been many changes in the industry and the business has developed into many new areas. From my father’s humble beginnings, we now employ a workforce of over 50 and have two offices in St Andrews and Kirkcaldy. Another change has been to our workforce which includes 14 apprentice electricians. Unusual for our industry 3 of them are female apprentices. This year, one of these 3 will become our first fully qualified female electrician. The construction industry has seen a sharp rise in the number of women employed. As a company we have been actively helping to promote women within the electrical industry. In their own words our female apprentices have kindly written about their experience of the industry which hopefully may encourage others to consider this as a career.

I decided I wanted to be an electrician in 3rd year at high school. I loved physics, it was my favourite subject, and when we covered the electrical section in class I decided that was what I wanted to do. Also, my Grandad was an electrical engineer in the hospital, so that played a part in the decision too, follow in his footsteps kind of thing. The apprenticeship is made up of two parts really, on-site experience and practical and theory at the college. I’ve heard some other apprentices complain about the college work, but personally I loved it. My hard work paid off when I was awarded the “electrical student of the year” award in my second year. Being a female in a male orientated industry is tough. When I first started, I was straight out of the school, never had a job before, so it was a total shock to the system. I was the only female “on the tools” at the time as well, which made it, well, a bit scary. However, the boys at work were quite welcoming and treated me fairly, as they would any other apprentice. As I’ve gotten further on through my time, I’ve earned the respect of my colleges. They know that I’m willing to pull my weight and not scared to get stuck in about a job.  Working for this company has given me the opportunity to gain vast experiences in all aspects of the trade, domestic, commercial and industrial. This has given me the confidence and skills I need to do a good job, and I look forward to enhancing my knowledge gained so far and continuing to do so, for years to come. It’s surprising how much my self confidence has improved as well, my family and friends have noticed a big difference in me since leaving school. The best piece of advice I could give to a fellow female is do not be scared to just go for it. I mean this in lots of senses, to go for this career for starters. I’ve been doing this for almost four years, and I don’t regret my decision. I love the feeling I get when I’ve been carrying out an installation, power it up, it all works and the client is happy with the work that’s been done. It makes me feel great, knowing I’ve done a good job. Don’t ever be scared to ask questions, that’s all part of the learning curve, and don’t ever be scared to try something you haven’t done before. It’s the only way to learn. If you make a mistake, you learn not to do that in future.

I helped my dad out when I was younger running cables underneath the floors as he couldn’t fit, this got me interested in becoming an electrician. Due to my nature i like being hands on, seeing different places and meeting new people therefore the job suited me.

I really love my job, however I have noticed that some people, workers and customers, are surprised to see a female electrician and don’t know how to act around me. Although after a bit of time they get used to me and act normal. RB Grant have helped by initially giving me an equal opportunity to be an electrician, they are also very good at not treating you differently but being considerate at the same time. If you want to become an electrician then you need to go for it, females working in the trades are becoming more popular.

From a young age I’ve always known that I wanted to be in a trade. To be sure that I really wanted to be an electrician I went to college and did a NC in Electrical Installation course to give me an idea of what it would be like. The hardest thing was probably getting people to take me seriously but once people realise I mean it they are very supportive. On site I have been mistaken for a boy a few times and people watch what they say until they get to know me. These points aside the elderly and vulnerable take well to me and are surprised when a girl turns up on their doorstep. RB Grant initially took me on as work placement with my college course which led to my apprenticeship. I get experience in lots of different things and in different environments. My bosses and colleagues have been supportive of me which has gave me the confidence I have needed to achieve what I have. If you want to become an electrician just do it and don’t let anyone tell you otherwise.

From our perspective the inclusion of female apprentices has changed the dynamics of our company culture and undoubtedly brought benefits to us. With fewer barriers for women in what has historically been a male dominated industry, it is clear the future will see increasing numbers. With more power to the girls the construction industry can develop in the right direction for the new generation.