A striking new entrance feature for John Smith Business Park in Kirkcaldy has been installed, marking a further step in the Park’s development. 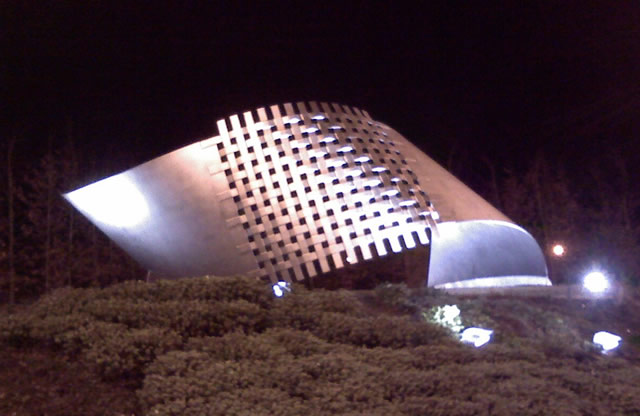 Called Thread, the piece has been designed by sculptor and designer Robert Kilvington and fabricated by Gray Fabrication in Cupar.

Robert said: “In designing this piece, I’ve concentrated on the crucial woven aspect of Kirkcaldy’s past. The pattern represents the warp and weft of the town’s textile industries while its overall curve represents a roll of a floorcloth or a length of linoleum. I feel that this is not only important for the historic context of the town but a good modern metaphor linking the new business park, responsible for the next phase of employment and sustainability, to its historical past.”

Councillor Tony Martin, Strategic Chair of Fife Council’s Environment, Enterprise & Transportation Committee said: “This sculptural gateway feature celebrates the connections between Kirkcaldy’s history and the new technologies represented by the businesses that are moving to John Smith Business Park. It provides a strong statement of identity at the entrance to what is one of the most important development locations in Fife, differentiating JSBP from other business parks and providing a point of reference for the companies there as well as for residents of Kirkcaldy.” 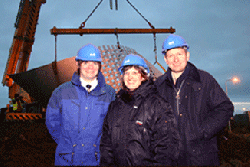 Councillor Alice Soper, Chair of the Kirkcaldy Area Committee, said: ”Not only does this sculpture demonstrate a sensitive appreciation of the town’s past and its future aspirations, but it also makes the significant statement that Kirkcaldy is ambitious and welcomes major businesses to the town.”

Gray Fabrications were one of very few companies in the UK who could roll and weld the sculpture with the level of detail required and their specialist expertise throughout the fabrication process has been invaluable. The piece required complex maths, computer aided design and unusual engineering techniques.

The sculpture was funded from the capital budget for the infrastructure works for the Park of £6 million (of which over £1.5 million came from the European Regional Development Fund) together with a contribution from Arts and Theatres Trust Fife.

Other pages in this section